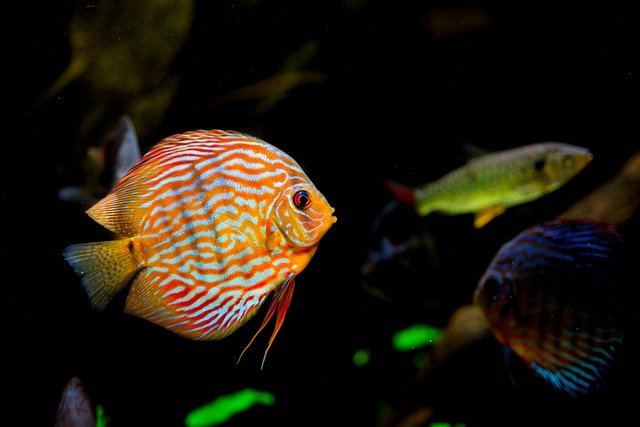 Diana Winston previously introduced the concept of the spectrum of awareness – moving from a narrow lens through a wide lens to a panoramic view.  In a recent guided meditation podcast, Diana illustrated how to practice these different types of awareness through meditating with fish in an aquarium.   She suggested that observing fish in an aquarium with varying focus enables us to develop our understanding of the different ways we can pay attention – from a very narrow and sustained focus to a totally open awareness that takes in all that is occurring in our range of vision as well as what is happening internally.  Diana used the Aquarium of the Pacific webcam to enable participants to practice these different types of awareness.

Diana progressively introduced a range of awareness practices after having participants relax and adopt a comfortable, upright (if possible) position.  This can be preceded by slow, deep breathing to bring awareness to the present moment.  In the narrow awareness stage, Diana suggests that you focus on a plant at the bottom of the aquarium where there are a number of bright, green plants.  The chosen plant serves as an anchor throughout the meditation with the fish.  Once you have chosen a plant, she suggests that you maintain your focus on this particular plant and, if distractions occur, return your focus to the plant.  This practice of returning to your anchor builds your awareness muscle.  It is natural for your attention to wander, particularly where you have a lot of movement in front of you as in the aquarium.  A brightly coloured fish, a ghostly stingray or a sleek shark may pull your attention away – you can then just restore your focus to your chosen plant.

Diana explained that this form of widened awareness can be activated by an investigative stance – e.g. exploring the movement of a fish as it passes in front of you from bottom to top, diagonally from corner to corner or from side to side, eventually disappearing from view.  Sometimes this widened focus can take in the synchronised swimming of a group of fish, moving artistically in pairs or threes.  Diana encourages you after following the movement of a particular fish or group of fish to return to your plant focus, again strengthening your capacity for paying attention and concentrating on a particular object.

Diana recommends that before expanding your awareness, you allow your body to soften and settle back to facilitate taking in the full screen, taking in everything that is happening in front of you in the aquarium.  As you observe the totality of the scene in front of you, you can notice the different colours of the fish (ranging from black to a bight orange), different shaped bodies and heads, varying speed of movement (from fast to very slow).   You can take in the ease and smoothness of movement of the different species in the aquarium, including varying movement of fins and tails.  You can extend your awareness further to take in the water itself, including the disturbance of the surface of the water as the continuous movement causes motion in the water itself.   Diana suggests that if at any time the scene and broader focus becomes overwhelming, you can return your focus to your plant anchor within the aquarium (e.g. some people may experience a sensation of giddiness with all the movement, colour, and glistening scales).

An addendum to this panoramic focus is to notice what is going on inside you, your own throughs and feelings.  This is in line with the definition of mindfulness used by MARC in their online and drop-in meditation sessions – paying attention in the moment with openness, curiosity and acceptance of what is occurring for you.  Your emotions may include calmness and peace, a sense of wonder and awe, or appreciation and gratitude. You can also check in with your associated bodily sensations at the time.  Diana encourages you, too, to become conscious of “who is noticing” being aware of your awareness – a uniquely human property as illustrated by clinical psychologist Noam Shpancer in his book, The Good Psychologist, when he compares the capacities of a human being to that of a zebra .

I had become aware of the spectrum of awareness through a previous post I had written based on one of Diana’s earlier guided meditations.  Coincidentally, I recalled this practice when I was having my lunch on the deck at my home.  When I finished my lunch (which I did not eat very mindfully!), I decided to take a panoramic view of what I could see from the deck, including the far away waters of Moreton Bay.  I noticed the trees and plants, the different shaped leaves, varying movement with the wind in the trees, newly formed and colourful spring growth and the sounds and movement of birds penetrating my visual space.  This process of widened awareness was very calming and peaceful.

As we grow in mindfulness through observation, meditation, reflection and other mindfulness practices, we can build our capacity to focus and concentrate, to appreciate and savour what is around us and to get in touch with the healing power of nature.

Image by Rudy and Peter Skitterians from Pixabay